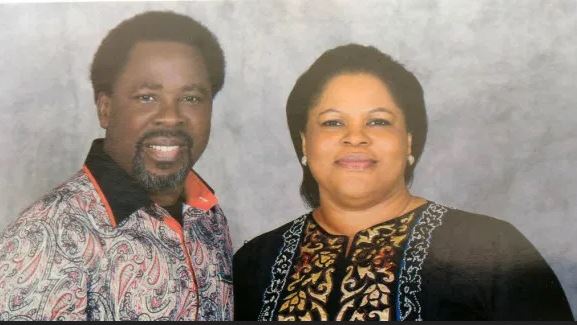 TB Joshua and Evelyn
Evelyn Joshua, on Monday, July 5, 2021, led the candlelight procession to begin the one-week programme leading to the burial of her late husband, Prophet Temitope Balogun Joshua, Founder and General Overseer of Synagogue Church of All Nations (SCOAN), Lagos.

It will be recalled that the late cleric died suddenly in the early hours of Sunday, June 5, 2021 from a yet-to-be-publicly-disclosed ailment.

Other events include tribute service held on Tuesday, July 6, and Wednesday, July 7, in which dignitaries, acquaintances, associates, ministers of God from across the globe, members of his congregation, beneficiaries of his philanthropy and the public gave moving testimonies concerning the noble life that he lived. In 2011, the man was estimated by Forbes magazine to be worth US$10-15 million. The tribute service was followed by service of songs/all-night praise, and lying-in-state, on Thursday, July, 8. The ceremony will be rounded off tomorrow with a thanksgiving service


But throughout the pre-burial programmes, Evelyn, TB Joshua’s wife of 31-years marriage, exhibited extraordinary stoicism as she took everything in her strides. But as dignitaries gathered, on the day of service of tributes to pay compliments to her husband on the life of worthy legacy that the Nigerian charismatic pastor, prophet, philanthropist, and televangelist who mesmerized his world with prophecies and miracles of healing and deliverance, lived, she could not help but betray emotion as she talked about their marriage. Suddenly, her seemingly stoic mien gave way to a tear-choked voice halfway through her short testimony.

Me, other women and TB

It brought back memories of the story that she told this reporter and Shola Oshunkeye, then editor of the defunct The Spectator, our sister newspaper at the time, of how she met and married her world-renowned sweetheart. Her husband is a man that every woman would want to have as husband she said, at the start of the interview.

Asked if her statement presupposed that she was in a serious contest or battle with other women over him, she retorted, amid laughter: “Not at all. I know that every woman will desire to have him as a husband but there are no struggles on my part to keep him. I know that when a man is hardworking and God-fearing, every woman will like to have him. But believe me, I fight no special battles to keep him.”

When the interviewers wondered how she was able to cope with his busy schedule, knowing fully well that women need their husbands, she answered that she didn’t have any difficulties handling that aspect of their relationship because “God has so made it that we complement each other perfectly well in very many ways.” With this answer, she launched into the story of how they met and married. The marriage is blessed with three children. Her story:

My first visit to TB’s house

“It was around 1989. I visited a sister somewhere at Ikotun Egbe Lagos, where the headquarters of the Synagogue Church of All Nations is located at present. And, they were talking about a particular man, a prophet to be precise. It was a kind of a meeting. And, it’s like everybody in that gathering, or at least half of the people in the room, had actually visited him. So, they were saying a lot of good things about him. This one said he prayed for him and things became okay from there. Another said her life was a bend but straightened up when she met him. You know, things like that. I was thrilled. At the end of the whole thing, I called the sister outside and asked whether she could take me to the prophet. I didn’t ask to go there out of curiosity. I actually needed a guide at that point in time.

“I wasn’t at any crossroads, but I desperately needed a guide. I had seen pastors. I worshipped in a church and I had read about prophets in the Bible, though I had not come across any. But at that particular time, I needed a guide, sort of and he fitted the bill snugly. Then I used to worship with the Assemblies of God Church. But back to my story, the sister and I scheduled a date. We got to his place but he was not around. Not to the Synagogue, but his house down in Ikotun Egbe, at Agodo. Unfortunately, we did not meet him at home. But looking back now, I thank God that we didn’t meet him that day because that would have been the end of the story. It would have been because of what he told me the very first day that I set eyes on him. If the sister were there, I would have believed that maybe she had gone behind me to tell him all about me. And, that would have ruined it.

“Some months later, I eventually met him when I visited him. That was in 1990. I could remember that day was a public holiday. I remember also that I nearly lost my way because I had never been to the place before except that day I went with the sister. But this time around I went alone. But before I was able to locate the place, it was a bit difficult. When I got into the waiting room, I met two men waiting to see him. Before this time, the idea that I had about the Prophet was that of an old man with white, long beards, and things like that. So, on that day, I was reading a novel that I came with, I don’t remember the title now, when I suddenly saw someone come into the sitting room, pick one or two things and went back. But the shadow of whatever I saw was not that of an old man.

“I didn’t greet him. I didn’t even look at his face. But when he left, I overheard one of the two men telling the other one, ‘that’s him; that’s him.’ I looked up but he was gone. They went into the consulting room before I did. Finally, it came to my turn, and I went in there. We sat opposite each other. And, he was gazing at me. He did that for about a minute and some seconds. I gazed at him, too. Transfixed as I was, I noticed that there was a piece of paper before him. Still looking at me, he wrote on it a Yoruba word “Ejide” (translated, it means twin has come). Lest I forget, I’m a twin.

“For about a minute or so, we sat looking at each other until he wrote my name on that piece of paper. And, then we started talking. He told me a lot of things about myself, the ones I know and the ones I didn’t know. I was shocked. He told me about my family, about my past, my present, and my future. After your secondary school education at that time, you could get a job in a factory or whatever, hoping to be staffed one day. So, after my secondary school education, life was like, today you are in business, tomorrow, you are in a printing press, and so on. I think the last place I worked before I met him was at Nigerian Distilleries in Ota, Ogun State. I was born into a family of seven. We are the fifth in the family, my twin brother and I. But he is late. I was born to the late Mr. and Mrs. Nicholas Akabude in the quiet town of Okala Okpuno in Oshimili North Local Government of Delta State.

“I started my primary education at St. Emecheta Primary School, Ezi Town, also in Delta State. Years later, I came to Lagos. That was in 1977 and completed my primary education at Orile Primary School, Oshodi, and, my secondary school at Grammar School, Oshodi. He told me all that. Altogether, we spent about 45 minutes. At the end of the whole thing, he spoke to me in Yoruba and said: “Joo ma binu o. Ma ro pe bi mo se nba gbogbo eniyan ti o ba wa s’odo mi soro ni eleyi o. Mi o ni ale, mi o dee fee ni ale. Sugbon, se oo fe mi? (Please, don’t be annoyed. Don’t think that this is how I talk to everyone that comes to me. I don’t have a concubine, and I don’t want to have a concubine. But can you marry me?).

“It was strange, but that gives us an insight into what the Scripture says that the Spirit testifies with our spirit that we are God’s children, as written in Romans 8:16. When I woke up that morning, I never knew. But something in me said: ‘Go to the Prophet.’ And, when he proposed to me, it was strange. I don’t think I have said yes up till now (laughter) but then, my heart agreed with it instantly. I think that was it. That was how I met him.

His qualities that won my heart

“Some months later, I asked him why he thought it was right seeing a lady for the first time and going on to propose to her. He said he has seen me four days before that very day. Honestly, I wouldn’t know whether it was through dream or revelation. But at that time a lot of things were going on in my mind concerning him. In the first place, I was expecting to see an elderly man. But I was shocked to see a dashing handsome young man. Like I told you, he wrote my name on the piece of paper before him. That was the first thing that really shocked me. And, the fact that he proposed to me the first time that we met without waiting to know some things about me.

“Interestingly, like him then, I didn’t have friends. As I told you, it was a sister that I visited who took me there in the first place. So, there is no how anybody could have gone to tell him about me. And, when I was going there the second time, she wasn’t there. I went alone. I have told you how I got to know about him. I told you, too, that I didn’t go there out of curiosity. I needed some guidance which I believe I could get from the prophet. That’s why I went.

“You know, life is all about challenges. As a young lady, I knew that God was there. I have a Creator and I know He can guide me into the right path. So, I wouldn’t say business or marriage or whatever drove me to him. I just needed someone to guide me on the right path. I saw an honest and humble man.

I saw a God-fearing man, too. I saw a kind-hearted man, a man of one purpose; a man with a sole aim: to please God at all times, with every other thing being secondary. I think those qualities are what cemented our relationship. I am not sure we courted for long.

The wedding took place the same year, 1990. A few years later, my husband sent me to Ghana and I was able to take some management courses there.”
Posted by Daniel Update at 8:25 PM