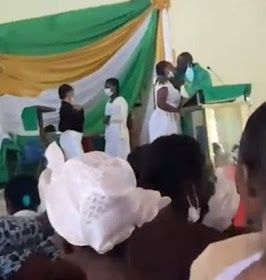 I can't share the video on this blog because I was disgusted when I saw it. Here is the back story of the viral video.
Reverend Father Balthazar Obeng was caught on video giving French kisses to three female students of St Monica’s College of Education, Ghana
After the video went viral on Monday August 16th, 2021, the Anglican Communion in Ghana had an urgent meeting and sacked the priest.
Reverend  Obeng was seen in the video removing his face mask and giving mouth to mouth kiss to each of the girls, causing the other students in the church to clap, laugh and jump as they cheered him on during the show of shame.
In the video, one of the girls had her face mask on and was reluctant to kiss the priest, but he coerced  her to remove her face mask and he planted his mouth on hers for a passionate kiss.During an urgent meeting that was held by the communion council on Tuesday August 17th, 2021, a statement signed by the Executive Director to the Metropolitan Archbishop of Ghana, Venerable Dr. George Dawson-Ahmoah says the church was saddened by the news and stated that thorough investigation had commenced and that the action of the priest would be dealt with in accordance with the norms and values of the Anglican Communion where morality is extremely revered in the church.
According to Joy Online reports, after the meeting was held on Tuesday, the Anglican Communion decided to sack the priest for his randy and shameful behavior.